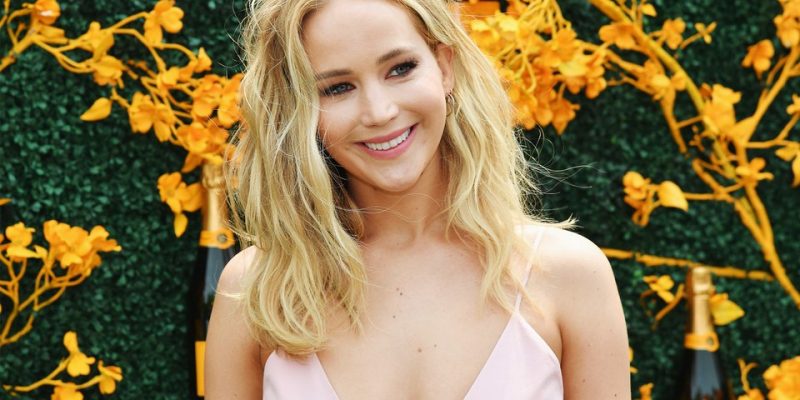 After not discussing her fiancé for a while, J. Law now has a lot to say.

Considering she’s arguably the closest thing the current generation has to a Julia Roberts—an A-list movie star who is hugely popular and critically lauded—Jennifer Lawrence has been keeping an awfully low profile recently.

The actress had said in previous interviews that she wanted to take some time off from film work, and she has done just that. She hasn’t starred in a movie since Red Sparrow, which opened in March of 2018, and did a minimal amount of promotion for the recent Dark Phoenix, in which she had a supporting role. She hasn’t done much in the way of press, either. She’s showed up for her contracted Dior events, and occasionally stepped out for some revelry (see: her gay-bar outing with Adele that elated the Internet). And, most notably, over this time period, one of the world’s most famous actresses has been in a relationship so serious that she’s now engaged.

We don’t know all that much about her fiancé, Cooke Maroney, other than that he’s a 34-year-old director at a New York art gallery who previously worked at the Gagosian gallery after he studied art history at NYU. Per a Cut source, Maroney is “definitely fun-loving but [not] out of control,” a “young good New York guy who likes to participate and have fun.” Sounds cool!

This new era of Low-Profile J. Law has meant that we haven’t heard much at all from the actress about Maroney, whom she appears to have begun dating in June of 2018 (they were reportedly set up by Laura Simpson, a friend of Lawrence’s). We’ve had to content ourselves instead with the steady stream of photos of the pair dining out at a slew of buzzy New York restaurants (with the occasional jaunt to Europe). In one set of these photographs—taken of the two at dinner in February—an engagement ring was spotted on Lawrence’s hand, which is . . . how we found out they were engaged. A few weeks ago, the couple were snapped entering an engagement party of some sort—it’s rumored they’ll be getting married later this fall.

On Thursday, though, Lawrence appeared on a podcast (!)—hosted by former E! host Catt Sadler—during which she gushed about Maroney. She seems, uh, pretty happy! “He’s the greatest human being I’ve ever met,” she explained. “He really is, and he gets better.”

Asked why she decided to marry him, Lawrence continued, “I don’t know, I started with the basics. How do I feel? Is he nice? Is he kind? It’s just—this is the one, I know that sounds really stupid but he’s just, he’s—you know. He’s the greatest person I’ve ever met, so I feel very honored to become a Maroney.”

Does this mean our J. Law about to become J.…Mar? Also, we are very disappointed there wasn’t a follow-up question here about how she feels about the closeness of her new name to that of iconic 30 Rock character Jenna Maroney (played by Jane Krakowski).

“I definitely wasn’t at a place where I was like, I’m ready to get married,” Lawrence said. “I just met Cooke and I wanted to marry him. We wanted to marry each other, we wanted to commit fully. He’s my best friend. I want to legally bind him to me forever. And fortunately the paperwork exists for such a thing. You find your favorite person on the planet and you’re like, You can’t leave!”

While she is very, very adamant about her feelings about the man she is marrying, clearly, the other elements of the wedding rigamarole don’t seem to concern her all that much. “I’ve been in a good place,” she said. “I haven’t been neurotic about it. I’m like too lazy to be neurotic. I saw a dress I liked and I was like, That’s the dress. I saw a venue and I was like, Cool, we got the venue.”

Cooke Maroney! The guy has a cool name, is the greatest person Jennifer Lawrence has ever met, is apparently a voice of comfort and encouragement when you’re feeling lame about demonstrating too much enthusiasm about an event. Not a bad C.V.!