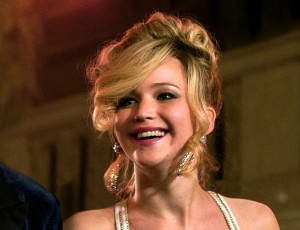 It was at the 2008 Venice Film Festival that Jennifer Lawrence — future Oscar winner, squirrel skinner, American warrior — signaled that she was no ordinary starlet. She wasn’t yet famous then, just a paparazzi afterthought to Charlize Theron, her co-star in “The Burning Plain,” one of those agonizingly dopey movies that play at major festivals because of their red-carpet power. During a pseudo-event for the movie, Ms. Theron spoke about the limited number of older actresses working in the industry and showered praise on another co-star, Kim Basinger, who wasn’t there. Ms. Lawrence apparently silenced the room by joking that Ms. Basinger had died. The girl can’t help it!

What Ms. Lawrence then said was funnier and so blunt that only a journalist for the British newspaper The Daily Telegraph appears to have repeated it. “Working with Kim was one of the most amazing moments of my life,” Ms. Lawrence said. “She’s so focused and smart and nice — everything you don’t expect when you hear you’re going to be working with Kim Basinger.” Was that a ditzy gaffe or a sly, funny dig of the kind that once might have come out of Judy Holliday? Or was Jennifer Lawrence just being Jennifer Lawrence, the best actress winner who tripped on her way to grab her Oscar for David O. Russell’s “Silver Linings Playbook” and then — in what was the perfect capper to the inanity of the awards season — flipped the bird at someone in the press room?

“Silver Linings Playbook” is the movie that turned me around on Ms. Lawrence, 23, transforming me from a skeptic into an appreciative admirer. Did she change, or did I? In the 1940 screwball comedy “The Philadelphia Story” Katharine Hepburn’s character says that “the time to make up your mind about people — is never.” That’s good advice, too, for film critics, whose trade calls on them to make judgments routinely after a single encounter with the objects of their inquiry. One viewing of her star turn as an Ozarks scrapper in “Winter’s Bone,” the movie that prompted many to break out the word breakthrough at the 2010 Sundance Film Festival, hadn’t convinced me, and neither did her turn as the blue bombshell Mystique in the 2011 action film “X-Men: First Class.”

As Tiffany, the randy widow turned dancing stalker in “Silver Linings,” Ms. Lawrence inhabited a deceptively tricky role with such transparency that it felt as if she had collapsed the space between her and the character. Tiffany doesn’t make much story sense — she cajoles Bradley Cooper’s character into partnering with her for a dance contest, though neither can really dance — but Mr. Russell’s film is irresistible, and Ms. Lawrence’s performance so likable, uninflected and emotionally believable that it makes the narrative contrivances irrelevant. Like all of Ms. Lawrence’s signature characters, she can’t be denied, whether chasing down Mr. Cooper’s wreck in “Silver Linings” or landing a kiss on Amy Adams that feels like a sucker punch in Mr. Russell’s latest, “American Hustle.”

In that film, Ms. Lawrence plays Rosalyn, the neglected wife of a con man (Christian Bale) who’s fallen for Ms. Adams’s character. Ms. Lawrence doesn’t have all that much screen time, but she’s a dominating, palpably physical presence, all thrusting bosom, scissoring hips, running mouth and towering, exploding hair. (She’s been nominated for best supporting actress.) It’s a delectable, juicy, surprising performance: You never know what Rosalyn wants, perhaps because Mr. Russell may not either. But that makes the character a woozy, destabilizing delight in a film that makes a virtue out of chaos. And because Mr. Russell likes working with women as much as men, Rosalyn isn’t a prop or fetishized spectacle but the equal of her male counterpart (Mr. Cooper).

When Rosalyn wobbles in heels, do we see her or Ms. Lawrence, and does it matter? In that wobble, you see a storm coming, as well as flickering reminders of Jean Harlow in “Dinner at Eight” and Marilyn Monroe in “Some Like It Hot.” But you also see one of those exciting, precarious representations of life that the movies offer us. Yet while all actors act, stars give more than performances: They deliver identifiable, commodifiable personalities that often blur the lines between their on-screen and off-screen worlds and the hard work that goes into star creation. Cary Grant personified cinematic elegance, but he also trained as an acrobat, which helps explain his physical grace even when he took a tumble. “Everybody wants to be Cary Grant,” he once famously said. “Even I want to be Cary Grant.”

From Ms. Lawrence’s interviews, her off-screen mugging, photo bombing and Marty Feldman-caliber eye popping, she doesn’t appear especially interested in playing the star; being human seems enough for now. That isn’t as easy as it sounds given how profoundly difficult it’s become for stars to have anything like a private life — to walk to a yoga class or pass out drunk in a friend’s car — without becoming fodder for tabloids and gossip sites. Some stars handle the lack of privacy disastrously, feeding the beast even as it eats them, while others turn their lives into performances that they deliver one item at a time, as Angelina Jolie brilliantly does. Many just smile and repeat the same canned answers about how thrilling it was to work with this other famous person.

The only sister of two older brothers, Ms. Lawrence may come across like a natural, but her talent has been honed by almost a decade of experience as a working actor. At 14, while visiting New York, she was tapped by a modeling scout. She showed up on television in shows like “Cold Case” (as the daughter of a murdered woman) and “Medium” (in one episode, she played half of a daughter-mother double homicide) and emerged unscathed from a bad sitcom, “The Bill Engvall Show.” In 2008, she added three movies to her résumé, including “The Burning Plain” and another forgettable title, “Garden Party.” More important, there was the leading role in an interesting mess, “The Poker House,” a brutal, autobiographically inspired film from the actress turned director Lori Petty about growing up in a home in which her mother turned tricks.

In playing the oldest of three daughters of a drug-and-drink-wasted prostitute, Ms. Lawrence slipped into a part that felt like a template for her roles in “Winter’s Bone” and “The Hunger Games”: the fresh-faced, life-hardened survivalist forced to be the parent for her younger siblings and their zonked-out mother. In “The Poker House,” she makes out with her mother’s pimp and waves around a gun, is raped and almost immediately plays in a championship basketball game. Although she looks as young as her 14-year-old character, Ms. Lawrence also projects the kind of native toughness in the face of large and small threats that makes the film’s agonies endurable. You have to wonder if this resiliency is what Jodie Foster saw when she cast Ms. Lawrence in “The Beaver.”

By the time “The Beaver” was released, in May 2011, Ms. Lawrence had already been nominated for best actress for “Winter’s Bone” (losing to Natalie Portman) and cast as Katniss Everdeen in “The Hunger Games.” She was 21 when it was released, which seemed too old for a food-deprived 16-year-old described in the book as looking like 14. That Ms. Lawrence’s curves might be part of the marketing calculus to attract male viewers to a female-driven film — the studio was chasing what the industry calls four quadrants, or male, female, under and over 25 — didn’t cross my mind until later. I still think that she was miscast, but after repeat viewings and a landmark sequel, it’s impossible to imagine anyone else leading this revolution.

In January, “The Hunger Games: Catching Fire” broke a couple of records, first by overtaking “Iron Man 3” to become the highest domestic grosser of 2013. That same month, the writer and incisive industry observer Mark Harris noticed that “Catching Fire” had reached an even more startling benchmark: It was the first movie with a lone female lead to top an annual box-office chart since “The Exorcist” 40 years earlier. “Catching Fire” — and, by extension, the film series— had, by ending a four-decade run of male-driven stories and romances, become a cultural touchstone that makes aesthetic objections beside the point. The franchise won’t force the necessary changes at the big studios, but its success should make it harder for industry suits and their media apologists to dismiss movies about women.

Even so, entertainment media types continue, with smiles and rank condescension, to label Ms. Lawrence “awkwardly charming” — a headline for a recent “Today” show online item said she made the Golden Globes “more awesome, in her great goofy way” — which suggests how anomalous she registers, how confusing and unclassifiable she is amid the bland and the blond. Instructively, her fame isn’t amplified or obscured by fashion magazines or the red carpet, where so many actresses keep up the appearance of stardom even as they’re denied sizable, serious major studio roles. She’s done her time posing and preening, playing the girlie girl, the paper doll and wide-eyed ingénue, but she’s also muscled onto the big screen alongside multimillion-dollar men like Robert Downey Jr. The odds still are not in her favor, but I’m betting on her to win.