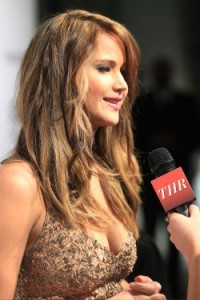 Some actors wilt under the pressures of Oscar season, a months-long slog that forces them to give daily interviews about the same movie over and over again. Fortunately, Jennifer Lawrence is not one of them. The Silver Linings Playbook actress and Best Actress front-runner has been hitting the social circuit hard over the past week (perhaps she’s making up for lost time, since an overlong X-Men: First Class shoot prevented Lawrence from doing much press in 2011 for her Winter’s Bone nomination), and whether she’s promoting Silver Linings on Conan, attending the annual Oscar nominees luncheon, or receiving an award at the Santa Barbara Film Festival, she’s dropping quotable bon mots right and left. Here are eight things we’ve learned about Lawrence over the past week:

She’s obsessed with Conan O’Brien:
“I’ve been watching the show for fifteen years, and I’m 22 years old,” Lawrence said to the talk-show host at the top of her Conan appearance. “I’m such a [fan]. Oh my God. The producer said to me, ‘Andy Richter’s going to hug you,’ and I started tearing up. You coming in [to my dressing room] put me at a 10, emotionally, and then her telling me that put me at a 15, and I couldn’t handle it.”

She loves John Stamos:
“He was at a party, and I turned into a perverted guy,” Lawrence told O’Brien. “I was following him into rooms and staring at his ass. I lost my mind. And I got so upset — I didn’t want to meet him, because when I meet people, it’s never good, and I was avoiding him — but then my friends brought him over because my friends are jerks, and I started really freaking out, and he asked me if I was on mushrooms, and I said, ‘No, I’m dead sober. This is just me.'”

She had a short-lived Abercrombie & Fitch modeling career in her teens:
“There’s this one picture where this girl’s just about to catch this football,” Lawrence said to O’Brien, “and behind her, I’m, like, flared nostrils, red face, my hair’s crazy and I’m midair, RAAAHH! … I thought that overnight I had just gotten really good at football, then I realized they were model footballing, and I was really playing football.”

She’s going for a high-fashion moment at the Oscars this year:
“I’m going to wear sweatpants,” Lawrence initially joked at the Oscar nominees luncheon, before adding, “Last time, [I dressed for] comfort. This year, I’m like, ‘Suck it up, wear a corset.’ I am going to go for fashion this time.” Is it difficult to pick an Oscar dress after months of wearing pretty frocks to premieres and awards shows? “That’s the problem with the Oscars: They’re always at the end where you are just exhausted from dressing up, so I never care,” said Lawrence. “Now, I will. Fashion.”

Spanx is her friend:
“Eating normally calms me down,” continued Lawrence at the Oscar luncheon. “I remember, before the [2011] Oscars, I was wearing that skintight dress, and I ate a Philly cheesesteak and fries. I was like, ‘This is definitely going to help,’ which it didn’t, ’cause I had to double Spanx it.”

The highlight of the Oscar luncheon was …
” … Sally Field asking me to carpool to some cocktail party,” said Lawrence. “And I just invited Jacki Weaver, and I’m trying to get [Naomi] Watts. Carpooling with Sally Field. Make my dreams come true.” J-Law added that all the actresses should rent a van together for awards-circuit purposes. “And all of us just unload: [Anne] Hathaway, Watts, [Jessica] Chastain, me! Like a clown car. It’ll be a lot more fun that way, and more intense.”

She doesn’t do a whole lot of preparation for her roles:
“I never actually read my lines until I show up,” Lawrence confessed at the Santa Barbara Film Festival. “It started out as a lazy thing. And then my friend was over, and she was like, ‘What scene are you doing tomorrow?’ and I was like, ‘I don’t know. Is that bad? Is there a point in my career where I should start learning my lines for work?’ And she was like, ‘Well, if it ain’t broke, don’t fix it.’ So, that’s that. I don’t have a way of doing anything, so I like to just mold to whatever the director likes. And I find that a lot easier to do when I don’t already have something set in my mind and I can just show up.”

What kind of movie would Lawrence like to direct, when the time comes?
“It would be like Step Brothers,” Lawrence told the SBIFF audience. “I’m serious! I saw Step Brothers and I was like, ‘Why didn’t I direct that?'”